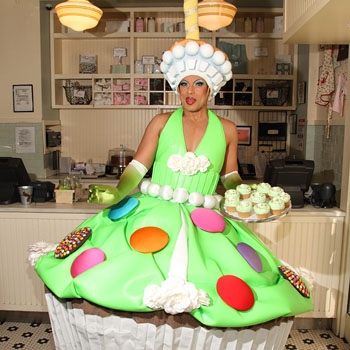 Priscilla, the bus known as the Queen of the Desert has seen many adventures since her all-conquering movie debut in the mid-nineties. The above picture celebrates her most recent stop for picking up new admirers...Broadway, New York.

Renowned NY eating place Magnolia's Bakery (cupcakes...we can do!) has created a confection based on dance designs made for the Priscilla musical – the first time (as far as I can tell) that a Broadway show has been honoured in this way.

I should say this pic is a fair representation of what the bakery have come up with... but they say their 'pistachio cupcake with fluffy pistachio meringue butter cream is topped with a meringue kiss, bright edible confetti and iridescent "disco dust!" '

Tony Sheldon (Olivier-nominated and familiar from the London West End stop) will be joining Tony nominee Will Swenson and Nick Adams for the opening night of Priscilla Queen of the Desert: the Musical at the Palace Theatre, Broadway this Sunday.Read more about the conception of these innovative cupcakes here.