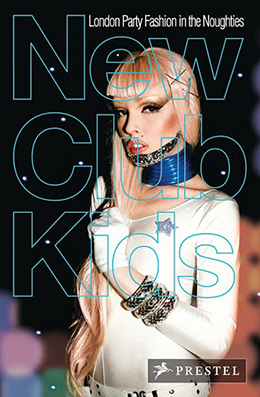 New Club Kids is a window into a unique clubbing subculture that does away with conforming to a set style of fashion, choosing to roll the dice and dress up in all manner that thinks "outside the box".

This book showcases the gamut of crazy freeform fashion that these fringe clubbers choose to wear to the parties, the motto being "Dress like your life depends on it, or don't bother".

Author Oggy Yordanov has lived in London's Soho district since 2001, and has immersed himself within the London club scene. He was also a fan and admirer of CCK.

Here's an extract of an interview with him from the book:

While selecting the photographs for this book, I reviewed thousands of images shot over the past decade. The incredible memories flooded back, all those amazing parties and amazing people that made my years in the great city of London so phenomenal. I want you to share these memories.

At the time I moved to London, in early 2001, the party scene was still dominated by the super-clubs – places like Fabric, Ministry of Sound, Fridge, Heaven and Turnmills – providing a vibrant playground for the young clubber.

There were huge capacity venues with great DJ line-ups that pulled in massive crowds of energetic party-goers, but one breed of party animal was missing – the club kid.

It was the time of "less is more" and dressing down was the ongoing trend. For a while I believed that the avant garde fashion of the real underground London had disappeared, somehow vanished with the modern transformation of clubland. Thankfully, things were starting to change.

Fashion has always walked hand in hand with music and London has a rich history of dressing-up. Club Kids or dressers, as some would prefer encapsulate the creative London as I know it. Fabul0us, yet trashy beautiful and scary, glamorous or freaky–meet the New London Club Kids.