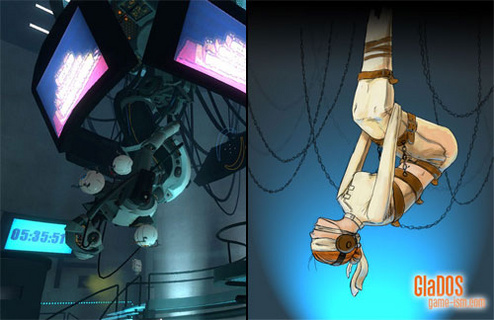 To some, Portal was a first-person shooter turned into a puzzle game. To many however, it is one of the most intelligent, subversive and thought-provoking narratives ever presented within a video game.

Video-games on the whole are created by and for a male audience. In the few cases that females are involved, they are merely the "damsel in distress" or the "love interest" of the male hero.
There are exceptions however like Lara Croft from Tomb Raider and Samus Aran from the Metroid series but even these women behave in a very masculine way, seemingly the only way they can be acknowledged within a male-dominated environment. They may be strong, but are also extremely sexualised in order to appeal to the male demographic.
That being said, things have got better for female characters in video-games, but they can't completely escape this stereotype.
Portal is a prime example of a game that tries to do things differently, deliberately going against the grain of male-centric video-game conventions. You play a very unglamorous looking woman in an orange jumpsuit named Chell that, beyond being female is barely acknowledged as the main character. The spotlight is truly stolen by the devious and sadistic female computer AI called GLaDOS who's sole goal throughout the entire game is to kill Chell (in other words, you).

You progress through Aperture Laboratories via means of the Portal Gun, a gun that with its two colour shots creates an entrance and exit point for you to go through, or acts as a means of manipulating the environment around you in order to aid your escape. The puzzles increase in difficulty as you progress, and more complex uses of the Portal Gun and the environment will have you scratching your head till the very end (unless you're good at that kind of thing!).
Beyond the premise of defeating GLaDOS and escaping the facility you are trapped in, everything else is open to interpretation. Some have said that the Portal Gun you use in the game is representative of a phallic symbol within a very feminine environment, but unlike guns in other shooters is a means of creation rather than destruction. Some have even said that, on closer inspection, GLaDOS looks like a woman hanging upside down and tied up in a kind of bondage gear. If GLaDOS is a woman trapped in the restraints her creators made for her, is defeating her in a sense setting her free?

I would be the first to admit opinions like this are really stretching to find deeper meanings beyond what is shown in the game, but in a way is that not part of what makes this game so iconic? The internet exploded with passion for the game, the meme 'The cake is a lie' has become a call to arms for fans to express their love for a game that has dared to give gamers a unique and more cerebral experience than the average shooter game.
GLaDOS constantly messes with your mind in an attempt to extract an emotional response from Chell, and therefore you. The use of a female voice is strangely comforting in contrast to if a male voice had been used instead. Despite everything, the player gains an attachment to GLaDOS where in other games you are instructed to hate your enemy.
I could go on about the various points depicted within this game, but with everything you can only truly make up your own mind by picking up a copy and playing it yourself. Not a problem, as you can get it on Playstation 3, Xbox 360 or PC.

And with the advent of the release of Portal 2 at the end of April, you too can get the chance to see where the geniuses at Valve will take GLaDOS, you and Chell next!