MagazineFilm: Burlesque (and a competition) 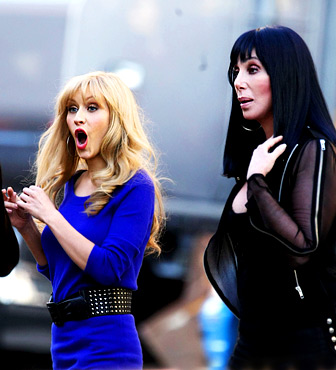 There has been a steady rise in activity for the variety of entertainments listed under the term 'burlesque'. Good news, you might think, from local reviews of such things as La Soiree and La Clique Even better news for those of you who like a little sassy glam in your knicker drawer.

This video of 'I'm a good girl' from the movie starring Christina Aguilera has certainly got the team grinning, and we're looking forward to seeing if the rest of the film is as good!

Competition time! Here's a picture of Cher and Christina on set. But what exactly is Miss Aguilera saying? And is it printable? Best caption as judged by the team (put it in the comments) wins a CCK goodie bag! The goodie bag contains some FYI chocolates, a few seasonal cards, and a special something from our shop.

Burlesque is released in UK cinemas on Friday; we suggest checking your local listings.