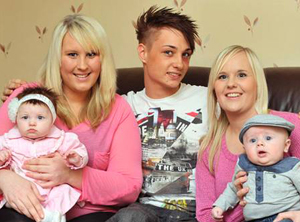 A double dose of joy has been given to a lesbian couple from Gloucester. After becoming civil partners in June 2010, both woman have given birth to children within five days of each other.

Anna Jones and Kirsty Cox felt that they would never be able to start a family of their own after being unable to afford the lengthy and expensive process of fertility treatment. After Anna's sister mentioned their plight to her hairdresser, he decided to help the couple and become their sperm donor. As a gay man, he understood their desire to start a family of their own; when the grateful couple accepted his offer, they expected a lengthy wait. Imagine the surprise when both women fell pregnant immediately!

Kirsty gave birth to their daughter Scarlett-Marie, and Anna had son Alfie. The children are now 11 and 10 weeks old respectively, and are often mistaken for twins. We at CCK want to congratulate Kirsty and Anna on their newest additions to their family.This is a wonderful show of support from LGBT community members; would you ever donate an egg or sperm to your friends in the community if you knew they were unable to conceive without expensive treatment? Kirsty and Anna say that the father will be involved in the children's lives if that's what he wishes, and it's great to see everyone coming together to help each other.

We'd love to know what our readers think. Should LGBT families be started only via anonymous donors, or does this happy story demonstrate that sperm banks are not the only way?