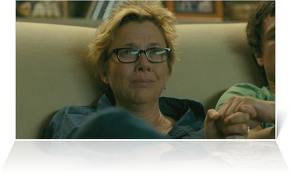 Spare a thought, if you will, for Annette Bening. She's been nominated four times for an Academy Award, but for some reason the prize statue does not get to be in her hands. 2011's reason: Natalie Portman's highly visible and all-conquering performance in Black Swan, which is still hooking up large audiences in actual movie theatres.

And while you're still thinking... that movie that Ms. Bening was in is called The Kids Are All Right. It was the one with the two mums, two kids and a donor. In a good year for film making, this interesting independent comedy was always going to be noticed. Unfortunately, when the prizes get distributed someone has to lose.

'The Kids Are All Right' review from Greg in Hollywood.