News & FeaturesNever Hide. Be Bold. Be You. 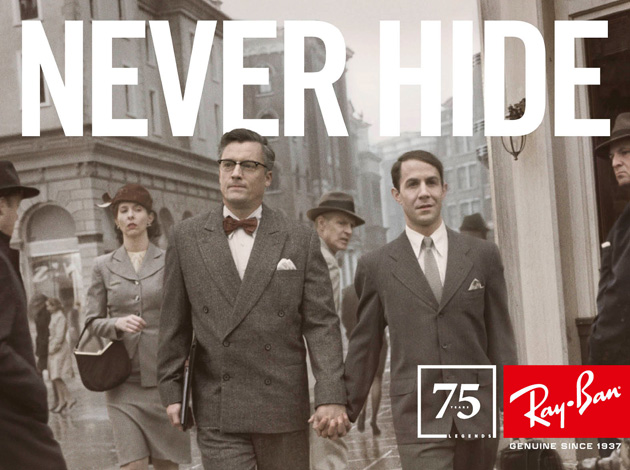 The stylish and iconic eyewear manufacturer Ray-Ban has released a series of advertisements to celebrate its 75th anniversary, including one featuring a gay couple which has caused Ray Ban to receive well-deserved praise from the LGBT community.

A press release from the company states 'the most fashionable thing you can be is yourself; be authentic, real, bold and stylish...never pretend. Never be afraid. Never give up. Never hide.'

Ray-Ban's 'Never Hide' campaign slogan 'Be Bold. Be You' embodies some of the values that CCK holds, celebrating individuality, acceptance and how being yourself is pretty awesome, no matter what age, race, gender or sexuality you happen to be.

The 'Never Hide' campaign was developed by Marcel, a French ad agency, and is inspired by real people and real stories, emphasising the message that being yourself and being authentic is fashionable.

It's fantastic to see an obviously gay-inclusive advertisement from a internationally renowned brand such as Ray-Ban, and CCK is excited to see the positive responses Ray-Ban have received following this. To read more about the 'Never Hide' campaign and the gay couple ad, check out Ray-Ban and The Huffington Post.