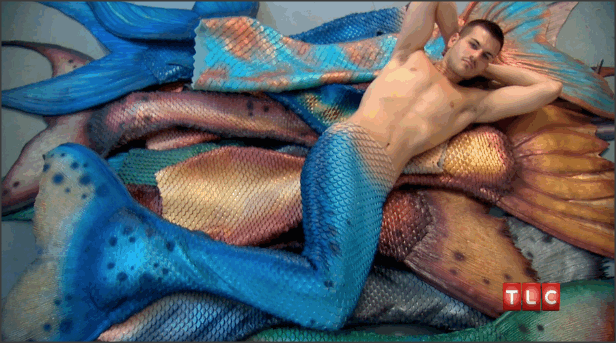 Every so often, we come across a lifestyle choice that we have not considered before and we go "wow that's cool" as if we have just discovered a new realm.

Eric Ducharme of the United States grew up in the shadow of the Weeki Wachee Springs, Florida’s legendary roadside mermaid attraction. Mermaids have been a part of Eric’s life for as long as he can remember. He was enthralled from the first time his grandparents took him to see the parks underwater theater, where a beautiful gold-tailed creature swam across the window, waving and blowing kisses to the audience. When Eric turned six, his father surprised him by having two glimmering mermaids swim up to the dock at Weeki Wachee’s waterpark, Buccaneer Bay, where Eric sat eating his birthday cake, so they could all chat and the mermaids could give the boy a birthday kiss and, with it, seal his fate.

He was still a kid when he started making tails out of anything he could find, including garbage bags, glue, masking tape, and the sheets off his own bed. He sewed his first fabric tails with a needle and thread, and later, after a few lessons from his grandmother, a sewing machine. At age nine, Eric attended his first camp at Weeki and finally got to swim in the springs himself. This is where he met former mermaid Barbara Wynns, who gave him his first tail, got him scuba certified, and imparted to him all her secret mermaid knowledge. For years she picked him up every day after school and on the weekends and took him to swim at the park, and they remain best friends to this day. Eric was 14 when he began donating his own tails to Weeki, and then filling actual orders.

Some kids want to grow up to become firefighters or superheroes, but all he ever wanted to be was a merman. It was only a matter of time before he began performing as one while also making a real business out of his passion for enabling magical transformations by providing the most realistic, jaw-droppingly gorgeous tails possible.

Eric started Mertailor in 2006, at the young age of just 16. By 22 he’s made realistic, hand-painted custom mermaid tails for a range of clients as diverse as Lady Gaga, RuPaul’s Drag Race contestants, Target, and Saturday Night Live and all manner of children and adults who dream, as he has for as long as he can remember, of other worlds.

His boyfriend Matthew told the US TLC TV channel, "when I first met Eric, I was introduced to the subject of mermaids, on our first date. [...] When we go swimming I don't even see him because he swims off to his own little corner, it's all about getting away from the rest of the world".

Today, Eric creates tails from materials like silicone, urethanes, and latex rubbers. He continues to experiment with new materials and forms, and won't stop until his tails are as real as fish scales and ocean reefs, and available to every aspiring mermaid and merman who dreams of life in the sea. You can order your from his website at http://www.themertailor.com

The TLC channel launches here in the UK on the 30th April and you will be able to see Mathew talk to camera about his lifestlye, if you cant wait you can catch a preview below.

We would love to hear your comments, do you own tails or would you like to?