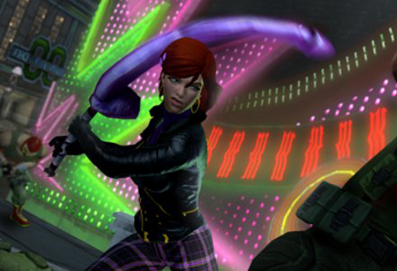 As the leader of the Saints Row Gang, it’s your job to lead your crew to victory against 3 new rival organisations and ultimately rule over the city of Steelport. In this type of game you have complete freedom over how you play, meaning if you don’t want to focus on the main story, you can just mess about in the ever-expanding city, causing chaos and having a load of fun while doing it! One of the biggest selling points of this game is the character customisation for the leader of the Saints. Using the Initiation Station system you can chose everything from the gender shape and build, personality and clothing and invent your character's taunts and compliments. The choice of clothing is truly impressive, giving you the freedom to dress up in anything from classy and elegant to funky, bizarre or just plain trashy! A special nod goes to all the kinky gear you can choose too, with leather and latex clothing available for both genders should you so choose. Failing that, you can always just run around the streets of Steelport completely naked! (barring some tasteful pixelation for censorship purposes of course!)

Another plus is that the story mode is completely co-op ready. This means you can play online with a friend or a complete stranger and experience the fun the game has to offer. The third installment in the franchise has turned the dial up to eleven, further defining itself as more than a mere Grand Theft Auto clone. The story is crazier, the action is wilder, and the lewdness lewder! (Does that even make sense?!) The game is officially out in the UK on the 18th of November, so there will never be a better time to pick up a copy and play the way YOU want to play!