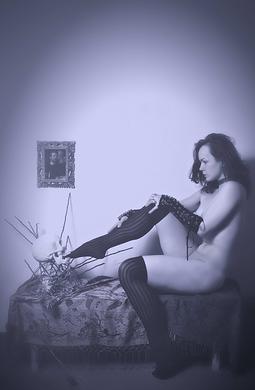 Hands up who is comfortable with one's own kinkiness? A fair few, we would hope.

Hands up who has never had any doubts about it, and particularly its darker edges? Considerably fewer.

Iulia Benze is inspired as Gretchen whose innocence is lost through enslavement, submission, and bondage (both of the mind and the flesh). Cast well and daring greatly, she is convincing both as a wide-eyed innocent and on all fours, conflicted in her ecstasy and with a flogger between her teeth. Her bound breasts alone, as one member of the audience remarked, make the ticket worth its price - this is quadrupled by her performance.

Alex Rex is the she-devil version of the Mephistopheles, complete with the most curious footwear. Thomas Thoroe as Faust is intriguing, particularly after he dons his leathers. Paula Brett and Leon Wander also hold up well, and make repeated appearances during the performance.

The devil, of course, is in the detail.

Any such critique, though true enough, would entirely miss the point.

We left in a contemplative mood, and have stayed so, with others also amused, tickled, and at times pushed to the edge of their comfort zone.